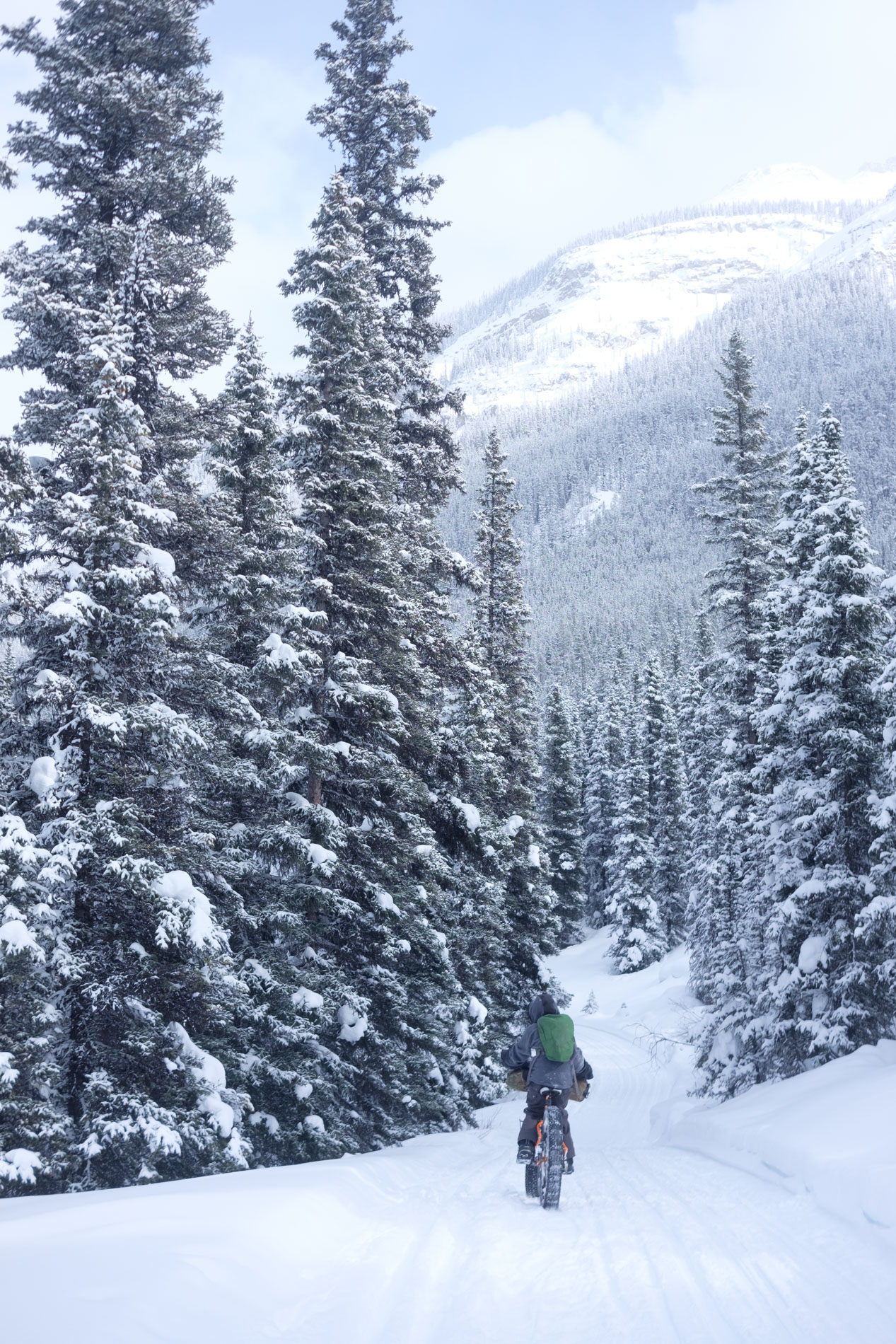 Every year I try to make it out on a couple of trips alone with each of our kids. The one-on-one time is great bonding for all of us. I try to choose something that will be at least some challenge so the kids can take some pride in it afterward. I have high hopes that I’m providing some opportunity for my kids to learn the freedom that nature provides.

In spite of our local school board’s efforts to instill fear of any cool temperatures in my kids, Fiona enjoys the challenge of a cold weekend. She was disappointed to hear that the forecast low for the weekend was -16ºC. “But I was hoping for cold!” she told me. Personally, I was thinking of how much easier it would be to not have to deal with the extra work that comes with cold. Putting on boots in the morning is so much nicer at -16ºC than -30ºC.

We’ve been on a few ski camping trips this winter, and I’ve been wanting to do some bike trips while the season is here, so I encouraged Fiona to agree to a bike trip. I had had heard good things about the Redearth Creek ride to Shadow Lake. Only the first 10km are open to bikes in summer, but in winter bikes are allowed as far as the lodge. (Shadow Lake Lodge is a beautiful historic backcountry lodge with individual cabins and a wood-fired sauna.)

We left the house on Friday afternoon, and after driving through a snow storm, (past many crashes, one of which I stopped to offer assistance to the driver) we arrived at the trailhead just after 4:45. We were riding by 5, which was good since at this time of year, the lights need to be turned on at about 6:45.

The trail was steadily uphill, but not overly steep, so I could ride almost all of it though conditions were a little loose. Fiona needed to push up many of the hills, the laws of physics dictate that 10 year old girls do not have the favourable power to weight ratio I have.

We weren’t there to race, so our many snack breaks and slow pace weren’t an annoyance, just a part of our ride. It did turn out to be the longest 7.2km in history though. I started investigating side trails for signs of the campground about 2km back from where the actual campground was. We were thrilled when we finally spotted the sign for the campground in our headlamps.

As per usual, few people had used the campground this winter. We placed a high priority on shoveling out the outhouse door to simplify visits later on. I often wish the National Parks outhouses did not have the front step exactly the same height as the door. It would be much easier to open the door if it were an inch higher so that we didn’t have to scrape every molecule of ice from the step. Since it was snowing hard, we set up our tarp, even though we had an ample tree well to shelter in.

There was a nice creek water source at the campground, and the approach to it looked very reasonable. I was, however, too lazy to shovel a path in the waist-deep snow to get to it, so we melted snow for our coffee, oatmeal and the day’s drinking water.

We took our time, and were riding our bikes by 11AM. Again, we weren’t racing, and since we knew that we had time to backtrack if we missed the campground, we didn’t even need to be vigilant, we just needed to enjoy the ride. We weren’t any faster than the guys on snowshoes who kept stopping to take pictures, but Fiona’s riding had benefited from a good night’s sleep and she was riding up some fairly steep sections of trail.

Fortune smiled upon us, and we encountered a woman snowshoeing just as we were to pass by the campground. She was surprised that we would even attempt to camp out in winter, but kindly showed us where the site was.

Our early arrival at the campsite left us with plenty of time to go for a short hike up to Shadow Lake proper. There wasn’t much to see on account of the heavily falling snow from overcast skies, but it was worth going for a walk and answering an extensive series of science questions from Fiona. Our discussion of the future of humanity did stray a little toward the preamble to the film “Idiocracy” but she was hoping to direct our evolution toward having 6 fingers per hand – because, “I’d love to have more fingers!” 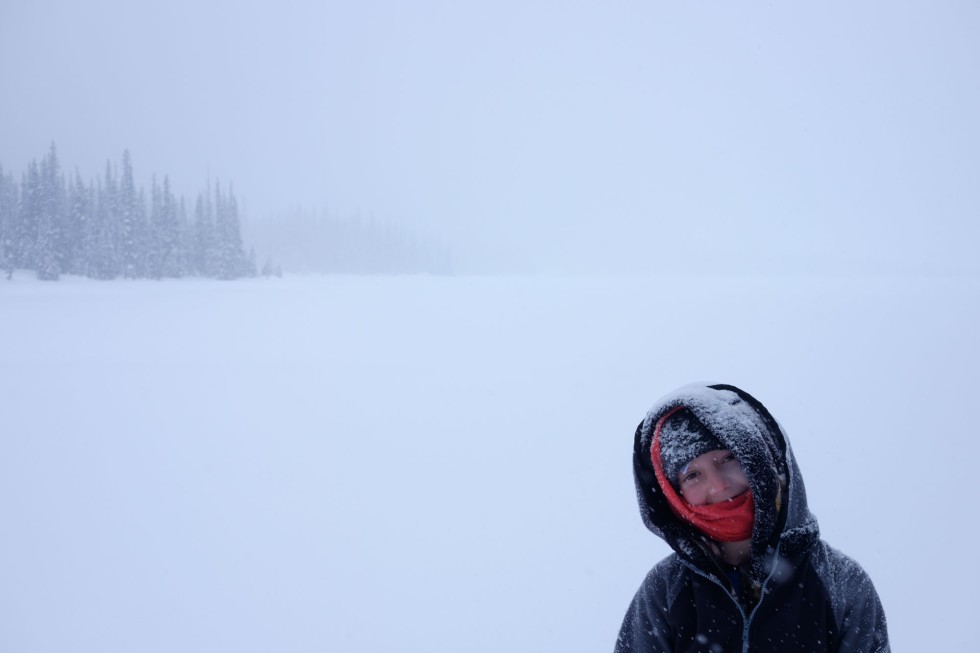 We got back to camp in time to prepare supper in the light and then, after some reading by headlamp, we were off to sleep.

I don’t know if it’s the mountain air, the physical exertion, or some other factor, but I always sleep well outside. I awoke feeling refreshed and happy. Fiona had also had a great night, and other than some reluctance on her part to put on her cold boots, she was at her best and helped with breakfast and breaking camp.

The trail back was mostly downhill, which we were looking forward to. We were somewhat concerned about the new snow that had fallen all weekend, but the trail was mostly rideable and with the weather cleared, we enjoyed much better views.

An interesting thing had occurred as the snow fell and the supply snowmobile from the lodge had passed up and down the trail, what had been a single trackset on the trail had become several. In a couple of places I’m afraid that we ran out of room and used the 6th or 7th ski track for ourselves, I know that I’d have a tough time being angry if I was on skis and was limited to even 1 set of tracks, so I hope everyone else feels the same.

The loose conditions allowed Fiona to practice her control skills. Though she acts modest, she has tremendous talent when it comes to keeping a bike going in snow. Of course, any time we get a chance to put in 3 consecutive days of riding, skills are going to improve. While Fiona had a couple of crashes, it was still a lot of fun.

I’d like to encourage others to go out and try this sort of trip with their kids, or on their own. Not only is it a learning experience and healthy physical activity, but it is fundamentally fun. With a little luck, one day we will get to a backcountry campground in winter and the outhouse door will already be shoveled.