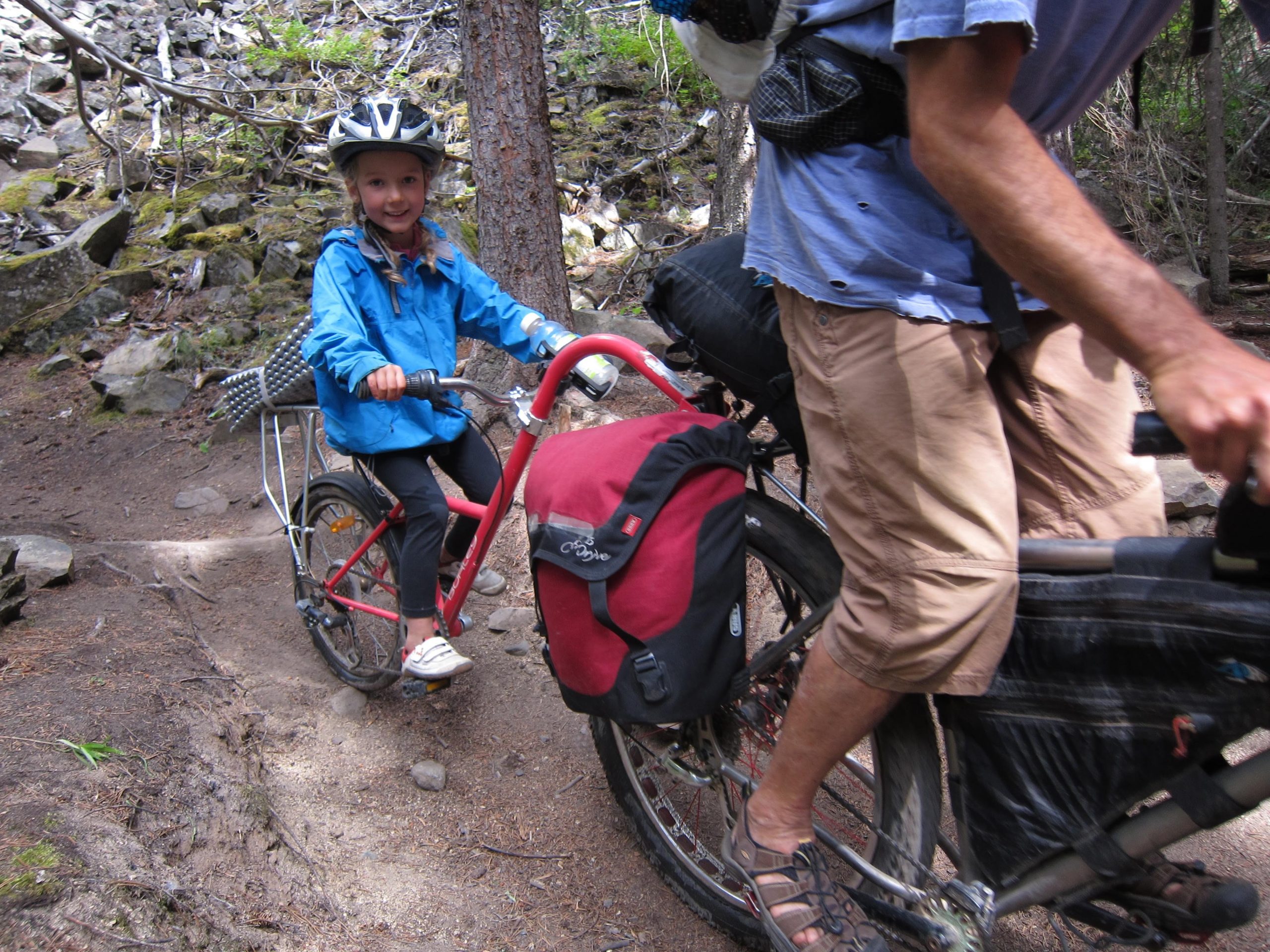 The Burley Piccolo is a a tow-behind half bike for kids who aren’t quite ready to pedal their own bike, but are ready to pedal. I owned one for 8 years, and this is what I thought of it. Spoiler: I used it for 8 years, so you know I probably liked it, a lot.

Disclosure: This article contains associate links. I included a photo of the safety sticker from the Burley Piccolo to give you an idea of what they consider prudent use. I do not advise doing any of the backcountry or off-road riding depicted in this article.

The first tow-behind I owned was a Trail-a-Bike. I really liked the bargain price, but I found it so unsteady that it was difficult for me to control my bike, even with a small toddler behind me. I tried it on my 60 pound nephew and it was terrifying. I gave it to a friend, and he liked it a lot, so maybe I’m just fussy.

After trying a half-dozen different brands of trailer bike, I liked the Burley Piccolo and the Tout-Terrain Streamliner. Since the Piccolo attaches firmly to its own rack, It did not have as many clearance issues with large or fat tires, though the rack size allowed only a maximum of 27.5 x 3″ tires. The Piccolo had had the huge advantage of being half the price of the Tout-Terrain, and there were Canadian dealers.

Since a primary use for this bike was going to be bikepacking, I was concerned about space for carrying gear. In the case of the Piccolo, I had many options. I could hang panniers from the Burley Moose rack that it attaches to. I could fit a seat bag above  the rack. I could also put  a second rack on the Piccolo itself, which I did, and I had the option of putting a handlebar bag on the Piccolo handlebars.

I put a strider ski on the bottom of the Piccolo. It works better than I expected.

Being the a huge fan of winter (This blog is  called ColdBike for a reason) that I am, I had a friend modify a second rack so that I could mount my Piccolo on my fatbike. This was a great modification to the Piccolo, and it was by far the best solution I tried for kids riding with me in the snow. When the trail got too punchy, I used a ski strapped to the Piccolo tire to get extra float, and by doing this, the fatbike tire would dig in to the snow well before the Piccolo did.

The Piccolo is a steady and reliable unit and I did not hesitate to violate all of the suggestions on the safety label. I rode it on several multi-day wilderness bikepacking trips and I found the ride to be comfortable and secure for all that I used it for. Since the attachment is essentially a bicycle headset, there is no wobble to the attachment, and so the handling is secure and wobble-free.

No product is perfect. My Piccolo was excellent, but it did have a few shortcomings.

First, the tire clearance on the Piccolo itself only allowed about a 1.75″ tire with clearance for fenders. This isn’t the worst thing in the world, but it did not allow me to fit my favourite tires.

Next, the Moose Rack rails are curved to allow for the centre attachment point for the Piccolo “headset”. This means that not all panniers will fit. Panniers with fixed attachment clamps sometimes don’t line up with the rack rail straight sections.

Last, the stock rack did not fit my fatbike, I may be the only one for whom this is a problem, but it was a problem for me. Fortunately, my friend Keith Simmons is an engineering technologist who fabricates metal things and he modified the rack to clear the tires and to mount to my fatbike. His rack modifications were professional, held up to some tough mountain biking, and held panniers better than the stock rack because of the more flared rails.

I bought this one, I’d buy one again if I had more kids. That is all.

I wrote a brief bit on tag-along bikes in general for This Mom Bikes, for her article on how to carry kids by bike.

Many pictures courtesy of VikApproved.

The ride to work on Saturday

Bikes as cargo on cargo bike

For the first time since the crash, I got out padd

Got out for a quick paddle today with my favourite

Fraud Alert: there is a fake me with a 2 after my

Getting hit by a driver with her car is no fun, bu

A wasp was annoyed at being stuck in my bucket of

Putting the chic in hobo-chiq™; I am making a ne

The only fun part of apocalypse grocery shopping i

I usually like to invite people over for pizza nig

Grocery delivery for @peter.dunlop.5 , not because

One of the pi from yesterday.

Today was the first day with a Viscoset headset in

Prices are in Canadian Dollars. Dismiss