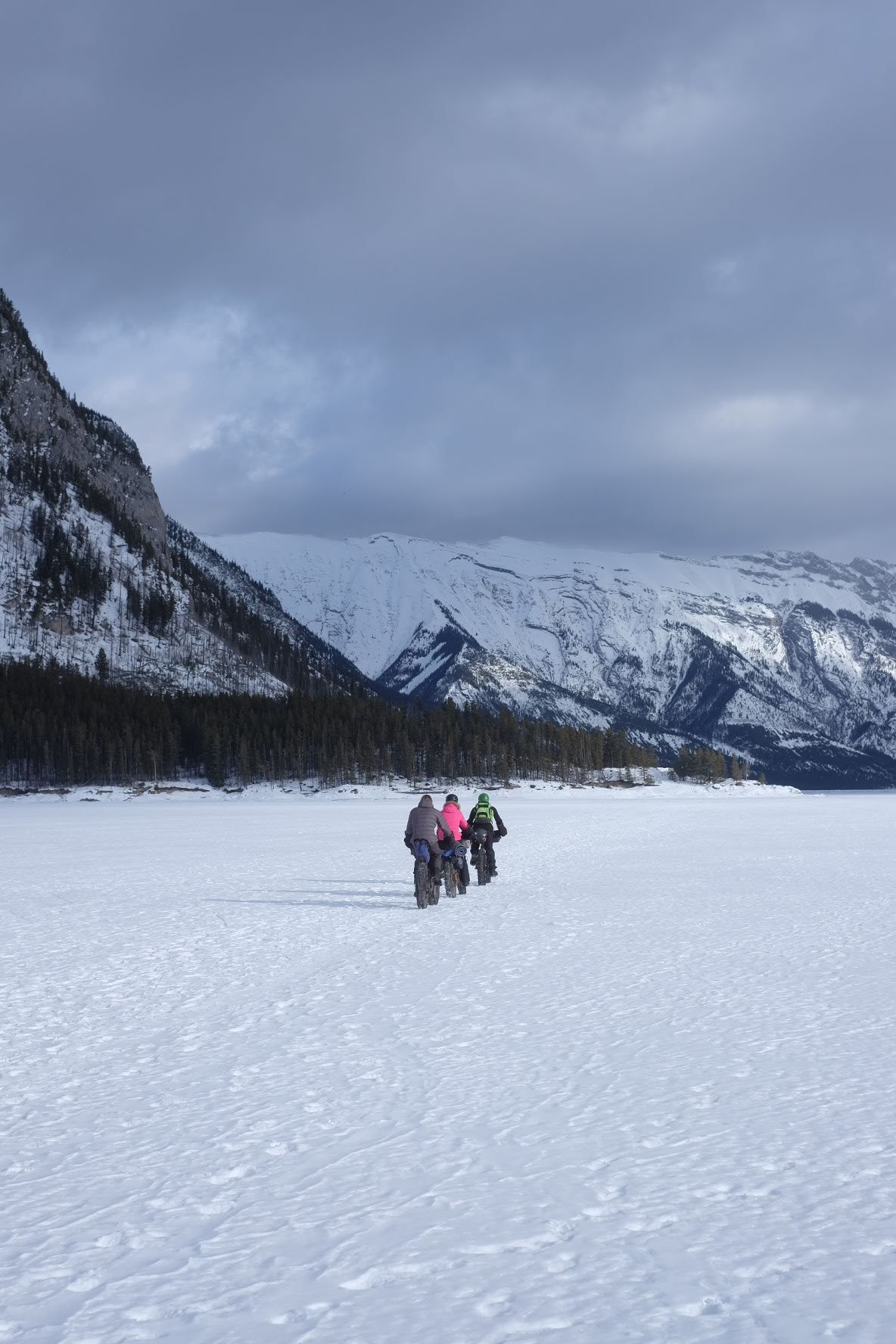 With their final exams written, Tadhg and his friends had a couple of weeks off. I offered a backcountry fatbikepacking with more teens trip as a nice break from the city.

Lake Minnewanka is one of my favourite spots to take new fatbikepackers, and since this was Camille’s first trip, it seemed a good fit.

Tadhg rode his own bike, though the bike has not grown and he is about a foot too tall for it. I lent Camille Tania’s Salsa Mukluk, some Porcelain Rocket Bags, and a pair of Coldbike Pogies. Adam has his own RSD Mayor, Coldbike Pogies, and luggage.

The lake ice was amazing in spite of our lack of studded tires, the surrounding scenery stunning,  and everyone had a good time other than some sore butts and helmet-induced headaches.

My friend Guy joined us on Tuesday (our middle day) and took the pressure off the teens to entertain me. He knows teens, so he brought chips.

There are always things you could do better in hindsight, I had a bag of my instant curried coconut rice that accidentally used what was probably garam masala instead of curry powder, so the rice was awful. There was a windstorm where we stayed on the ice instead of re-routing to the more sheltered trail. But overall, the kids had fun, and I had a good time too. Everyone listed my burritos as a highlight of their trip, so that was a win. A couple of the teens really enjoyed the instant oatmeal, so that is an easy win.

I somehow managed to capture no adequate photos of Guy. Sorry Guy!

Disclaimer: There are affiliate links in this article. They pay me a small commission at no cost to you. Except for the pogies, I make them, buy some, they are the best you can get.

5 day date on the Rockwall with @taniachimo

If I eat this will I die or hallucinate?

Why yes, I did get more than I planned, and for th

Firing off a few rounds from his home-made nerf-co

Making her room more her own

Does riding your bike to work with a bag you made

No such thing as a bad day #fatbikepacking but you

We tried for Elbow Loop, but neither of us could g

I am back from my time off and back to the sewing machine. Currently shipping in about 7 days. Happy 2021! Dismiss