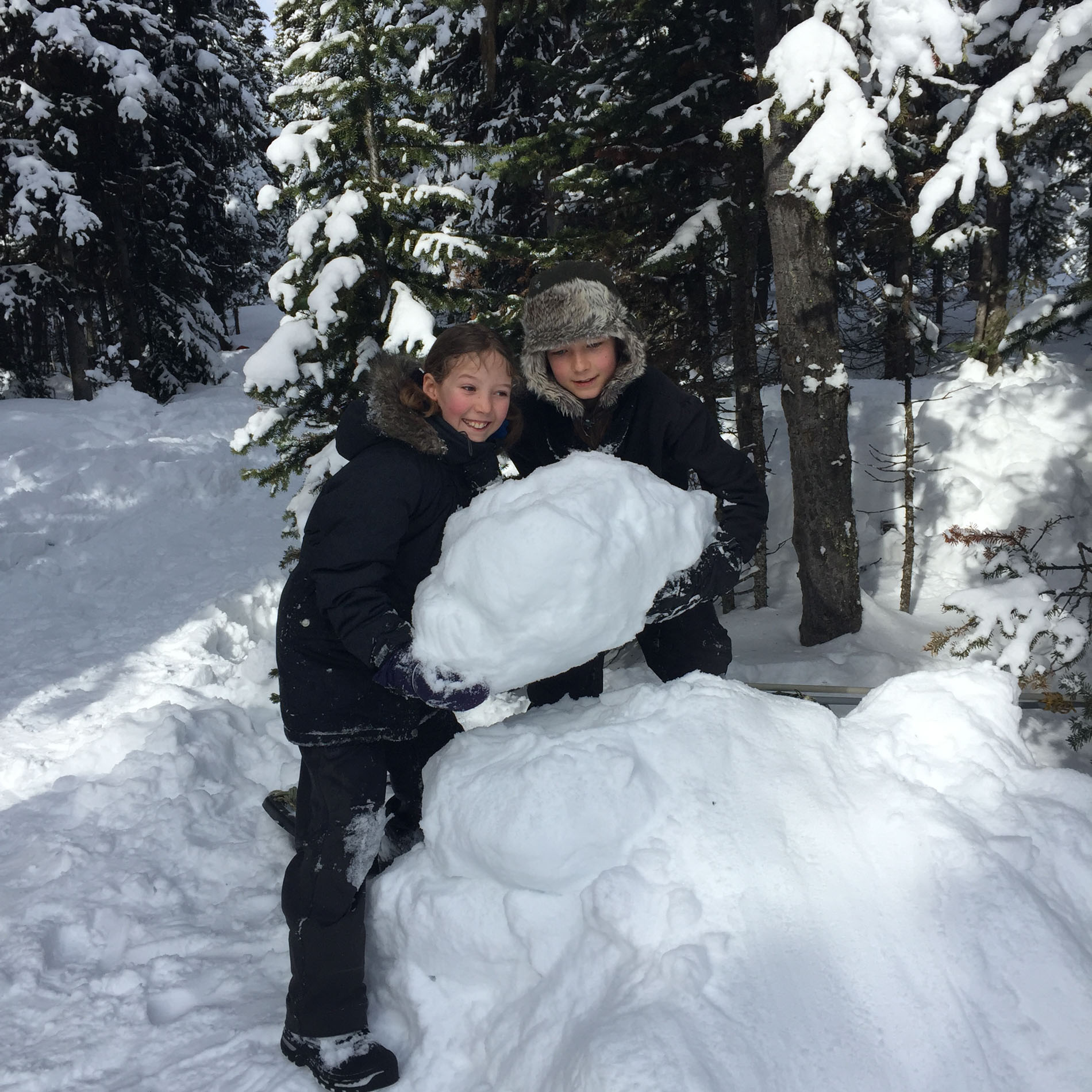 Last year, we managed to get to Lake O’Hara in Yoho National Park for the first time. We had so much fun that we decided to do it again this year.

This year, I built a second pulk sled for Tadhg, and mine is much more refined than my original. Tadhg is not the biggest backpack fan, so now he has the option to ski without wearing one, though he is pulling the sled, unlike on the bike where he has bags on the bike.

The trail in to Lake O’Hara is an 11km gravel road which is groomed and trackset. It climbs steadily for the first 2 and last 3 km, with the middle portion being rolling hills. Other than some waxing issues I was having (Skier Bob was having the same troubles), the trip up went really well. I had decided to avoid the trouble of melting snow for our water by bringing up 20L of water for the weekend. While pulling it in the sled was much easier than carrying it, I would skip the water carrying next time. I might bring a large pot to make snow melting easier, especially at Lake O’Hara with its eating shelters with stoves.

Just past the half way point, we met the aforementioned Skier Bob, and he took our picture and spoke with us for a while about my waxing issue and about our camping adventure. We were lucky enough to have our picture featured in the skier bob story of his ski.

When we reached the campground, we were disappointed to find the toilet was locked. This seemed unusual to us since we had been there before and had used the pit toilets there. There was another outhouse up at the Le Relais shelter (about 5o0m up the trail), but it seemed a long way to go when you need to go.

There are two picnic shelters at the campground, both with wood stoves. The wood stoves are usually very convenient for cooking on, but they work poorly with the door opened, and the shelter we chose had the stove door panel removed, so it was not getting as hot as we wanted for toasting our burritos. We at least got them hot and melted the cheese, even if the outsides weren’t as crisp as ideal.

When we arrived, we had the entire campground to ourselves and we shoveled out the first spot for the tent, followed by laying out Fiona’s and my sleeping bags and pads in a stomped down area in a tree well. (like described here). Fiona is definitely a fan of sleeping outside, and our setup was as outside as you get.

Our morning was the usual routine of backcountry cappuccinos for Tania, fresh-ground Aeropress coffee for me, and breakfast all around. The overnight temperature was around -12ºC, so while my water bag was partially frozen, the milk was only at the slushy stage. Winter camping is generally easier than summer when it comes to keeping foods fresh, though fruits and vegetables are often susceptible to damage from freezing.

We had plans to build a quinzhee, so we did some shoveling to pile up the snow. Well, mostly I did the shoveling. I got a good size pile, and we went for a quick snowshoe up to the lake, the Elizabeth Parker huts, and a bit of the surroundings. The kids were looking forward to getting back to the campsite, so we only wandered for a couple of hours.

On our way back to the campsite, we saw that some people had arrived at the warden’s cabin, so we stopped to ask about getting the toilet unlocked. Edwin, the warden, wasn’t hopeful, but said he would come by later with some keys he had to give it a try. He also provided us with a great lesson on an ingenious braking system for the pulk sled, as well as some good general information. He and his friend seemed very impressed that we had our kids out winter camping.

Edwin did have the correct key and got at least the women’s washroom unlocked, this would be much handier in the morning than the substantial walk. Not that we don’t like walking.

Digging out the quinzhee was going rather well, the interior was starting to get fairly big, until a sudden settling alerted me to the fact that I hadn’t packed down the base enough, especially on one side. Rather than risk an unstable shelter, I abandoned the project – the kids were mostly building their slide anyway.

We were joined on Saturday by a group of men who set themselves up in the other shelter and started drinking. They seemed friendly enough, and we assumed they would be like a similar group the year before, competent and quiet.

As we finished our dinner, a second group arrived, this time two couples. We didn’t see much of them that evening, but they were definitely there to enjoy the backcountry.

After another delicious dinner of what has become a camping staple for us, red lentil sweet potato dal (I have been shredding it with an immersion blender to make the sweet potatoes rehydrate better), I read to the kids for a couple of hours, and then we headed off to bed. I had deployed the tarp to keep the snow off Fiona and I since it was snowing fairly steadily.

Though the group of men in the picnic shelter did have a fairly loud and late party, we slept well enough, and soon morning dawned. It had snowed several cm overnight, and the campground looked nice with the fresh covering of powder.

Some of the campground was not so nice. The party group were packing up quickly, no doubt because they were hung over and hopefully embarrassed to have left so many cigarette butts and so much mess in the shelter. Somebody had also peed on the seat of the privy, failing to lift the seat seems to me to be the epitome of laziness, as well as an indication of contempt for your fellow campers.

Breakfast, on the other hand, was a treat. The two other couples in the campground joined us in the shelter, and they were beyond delightful. Not only did they have some more good pulk sled information, but they were clearly people who embraced the joy of winter camping. Though I failed to get any of their names (social graces are not my strong suite), we thoroughly enjoyed meeting them. Their invitation to join them on an Iqaluit (where one of the couples live) adventure was icing on the cake. Their coffee setup was similar to mine, with a portable grinder for the beans while they had a 2-tier stove top espresso machine rather than my Aeropress.

The ski-out featured enough fresh snow that Tadhg and I were sometimes pulling the sleds downhill, since they had enough drag to not slide on their own. The temperatures were warm enough that we struggled with snow buildup on the kick zone of our skis, but some scraping and crayoning of glide wax in the problem areas seemed to help.

Though we might want to skip the party gang next year, we still had a great weekend and enjoyed our visit easily as much as last year.