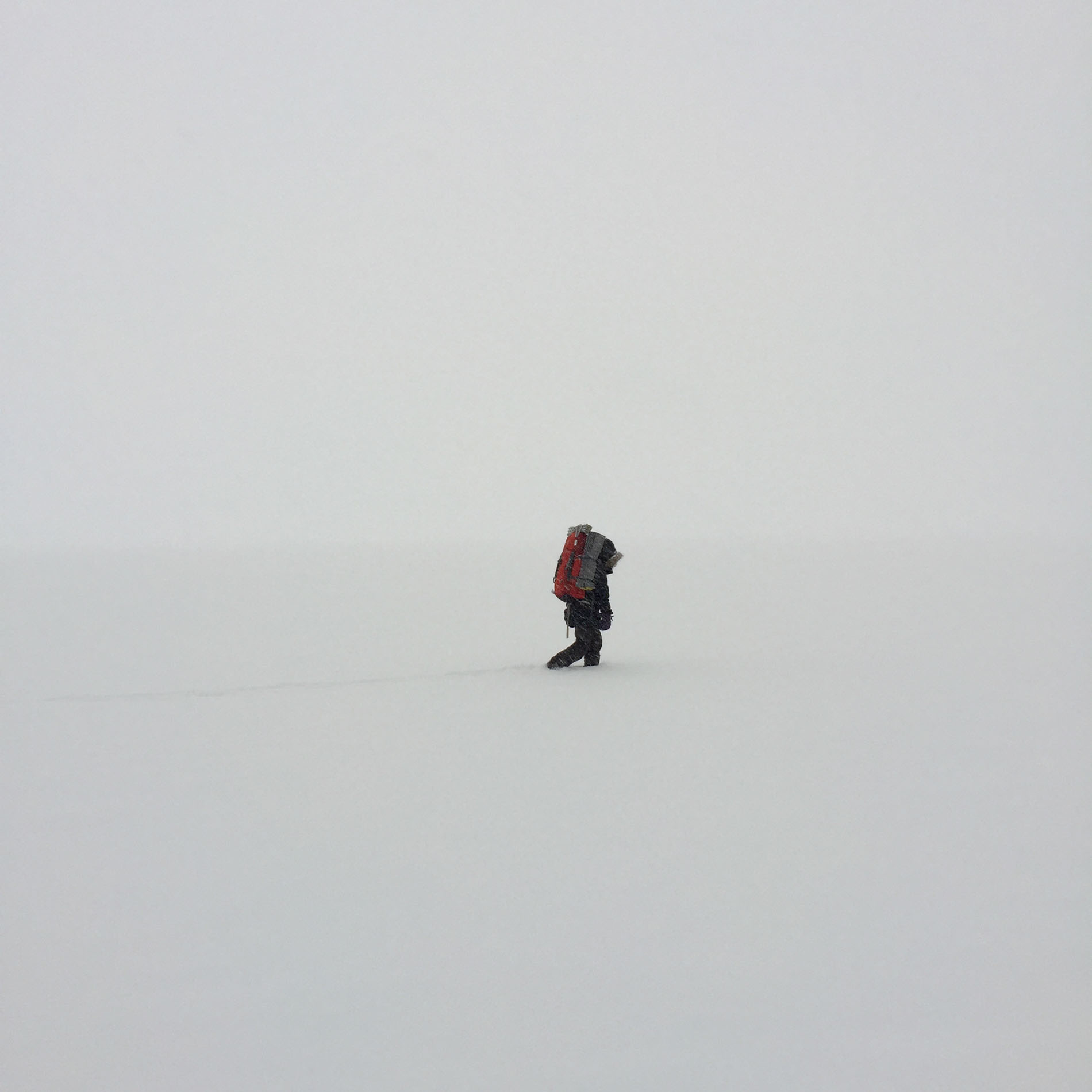 Like all bad ideas, it started innocently enough. “The kids have no school on Friday, let’s go camping.”

The Point campground on Upper Kananaskis Lake is a spot that we have walked past, but not camped in. It is only 4km from the trail head if you go the hard way, and 7km the easy way. When we had been there before, it had been summer, so we were blissfully unaware of what winter conditions might entail.

We thought it might also be a good shakedown for my new pulk sled, before we take it on a longer trip. The new sled is basically the same as the old one, with slightly improved hardware.

We set off in the snow at a balmy -12ºC on Friday to hike to Point campground. We chose the 4km route since it was shorter and there was just the one hill that we could recall. Tania and Fiona got a head start with Tadhg and I hauling the sleds behind. The forecast called for -18ºC at night, so we brought a few extra items of clothing and sleepwear just to be on the safe side.

It was snowing as we set out, as per the forecast. We figured the sleds would work better with a bit of snow, so we weren’t overly concerned. Of course, the hike started with a pull across the gravely surface of the dam, where there was almost no snow at all. Soon though we were into the woods with a wonderful packed trail that climbed gently enough the forest. 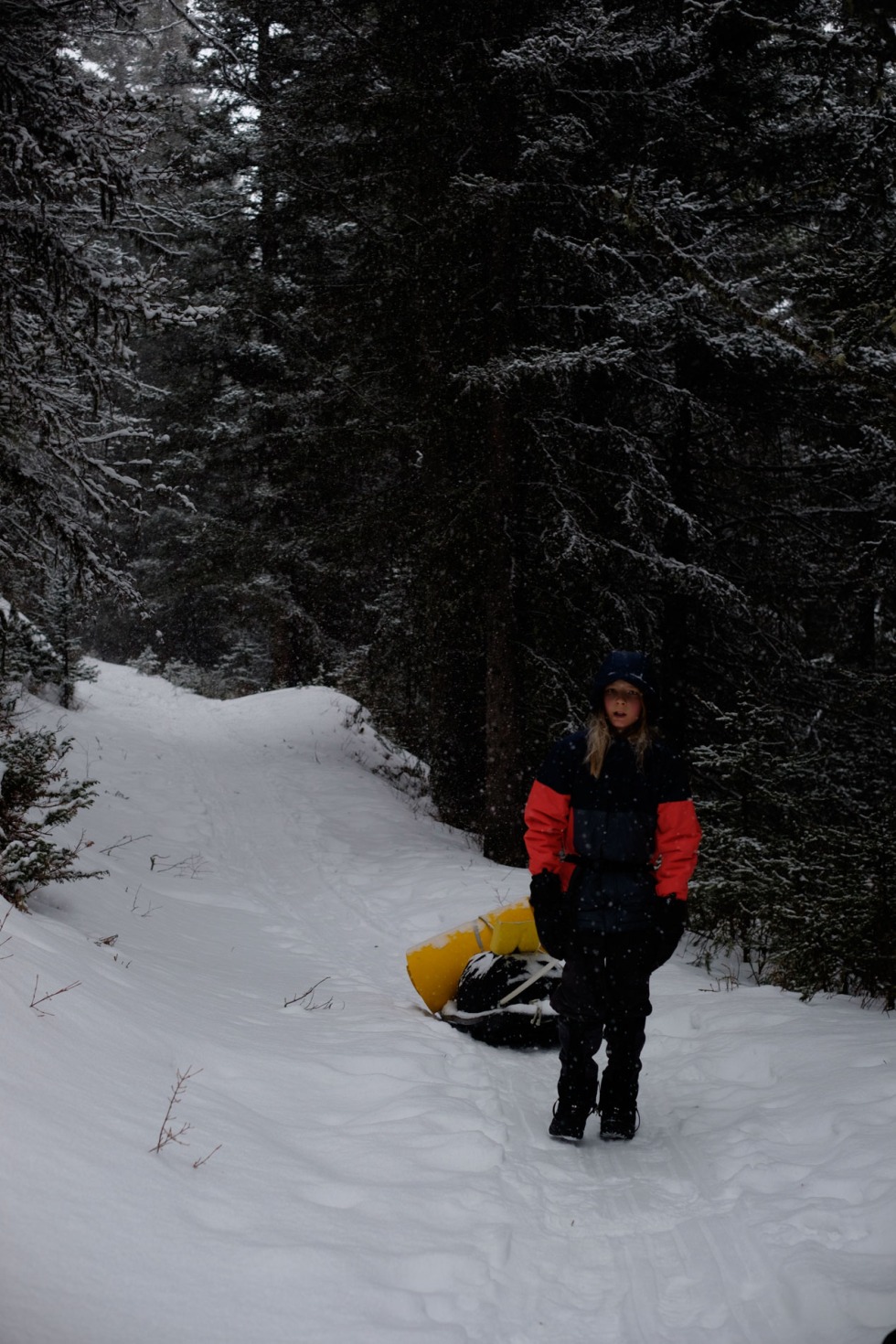 The first avalanche path that we came to was pretty icy and slanted, so we unloaded the sleds and ferried the gear across so no gear would get lost if the sleds went downhill. The next avalanche path was much easier to traverse.

Another short section of path led us to the switchback boulder field that led down the hill we had climbed. We had totally forgotten this part of the path, and it was more than a little obscured by snow. This was where we met back up with Tania and Fiona, who had turned around and were heading back to the car since they had been unable to find the remaining path to the campground or the campground itself due to the whiteout conditions.

It turned out that the path they had been following was not the correct one, just the one that many people had trampled. We never did find the correct one, but by heading across the lake for a bit, we came to the campground. 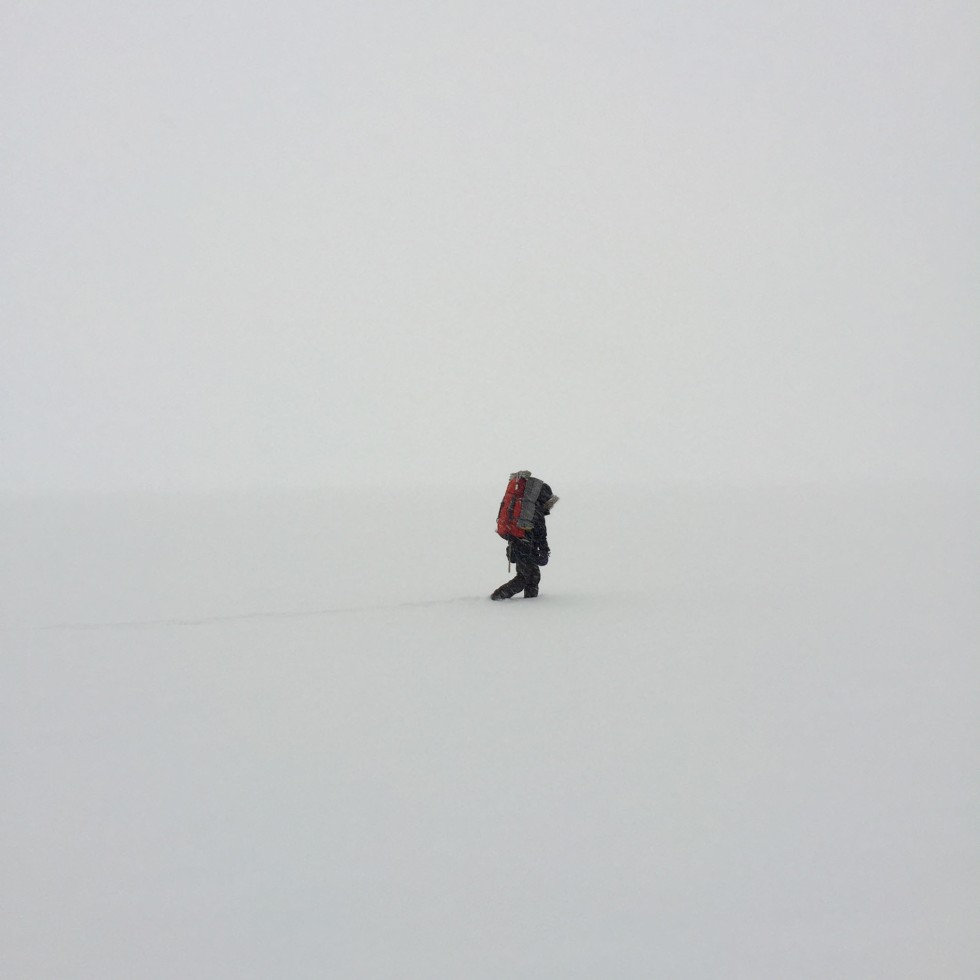 The Point is a fairly extensive campground with about 30 sites and 2 outhouses, but we were happy with the first two sites in from the lake, which had a pre-shoveled tent pad and a quinzee, respectively. The roof on the quinzee was a little low, but a bit of shoveling got it to the point where I could stretch out enough to sleep and we were soon set for the night. (Fiona and I had the option of sleeping under the tarp as usual, or sleeping in the tent).

Once we had the tent set up, we moved on to our favourite opening night meal, roasted burritos. A few folks have asked, so here is the basic recipe.

3 cups dry pinto beans, 1 large onion, 2tbsp miso paste, 3tbsp chilli powder, 1/4 cup of butter. soak the beans overnight, rinse them, add ~4cups water and the other ingredients, cook in a slow cooker about 8 hours, blend with an immersion blender until they are not-quite smooth. Then dehydrate them in a dehydrator. I usually fry some onions and red peppers and dehydrate those at the same time. At the campground, I rehydrate the beans and peppers, wrap it in a wheat tortilla with some shredded cheddar and then I roast them on the grill that comes with most fire pits, or on a flat rock if I have to.

Running out the clock when camping in winter is sometimes tricky, but this time around, we managed to keep everyone up and active until 9pm, and so we headed to bed.  We woke up to a few inches of fresh snow in the morning and I started in on making Tania’s coffee. Fiona started converting the path to the bear-proof lockers into a bobsled track, which was good, since it kept her warm in the -19ºC temperature.

Our Saturday was spent on the usual Saturday chores, building a quinzee, making a bobsled track, going for a hike across the lake so we would have a better trail for the morning (foreshadowing) and of course a great deal of eating. It continued to snow for the day and the temperature stayed pretty steady, so we had an easier time staying dry.

When I looked out the quinzee door on Sunday morning, there was only an inch or so gap between the snow and the top of the door. After burrowing out through it, I found myself in fresh snow up to the tops of my thighs, nearly 3 feet of snow. My hands were dragging in the snow if I didn’t lift them.

This table had been cleared to bare metal just the night before.

Before making coffee, I excavated the lower 4 feet of our 6 foot tall tent from the snow so Tania and Tadhg could get out without an avalanche.

The top 3 sections of our 7 section tent.

The temperature felt balmy, I was shocked when the thermometer read below -20ºC.

Once coffee was done with, we had a quick candy and granola bar breakfast and quickly packed up our stuff for the slog out.

And what a slog it was. I was towing over 100 pounds on the sled, and the snow was deep enough that the sled was just plowing it rather than gliding on top. The snow varied between waist and upper thigh deep and even though it was fluffy, it was still an all-out effort to pull the sled through it. I tried to keep my forward progress to a minimum of 20 steps between breaks, but sometimes I didn’t even make that many. It was also quite windy, so I no longer thought it was warm. This went on for 3.75 hours to make the 3.5km back to the car.

At one point Tania asked me if I felt like I was Max pulling the Grinch’s oversize sled. I responded that I’d sure like my heart to grow three sizes that day… 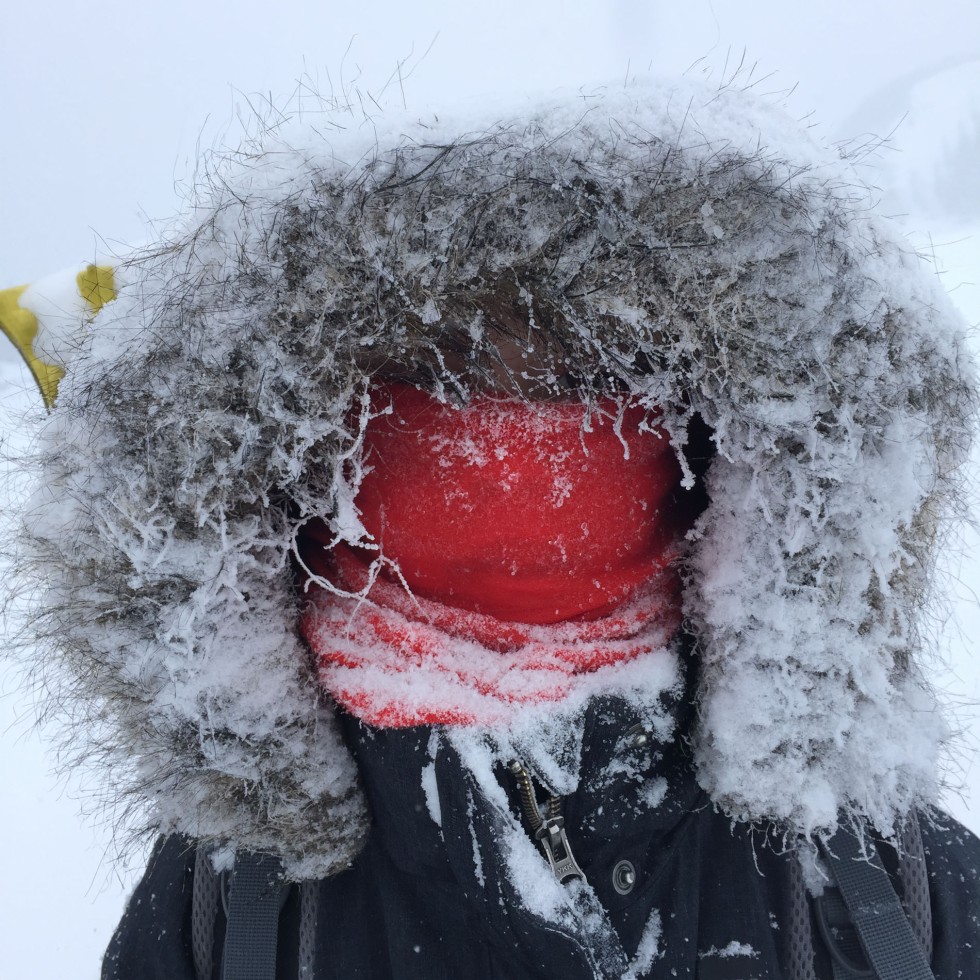 Now, a lot of people have asked me this week if I felt like activating the SOS feature on my InReach device. and the answer is, “not even close.” Now, this was a very difficult trek for all of us, but that’s not something that requires a rescue. If any one of us was in danger of so much as losing a toe, I wouldn’t hesitate, but we were not at that stage. At all stages of our weekend (including the hike out in the full out blizzard), we consistently asked the kids how they were doing – how were their feet/hands/face, etc.   We were all very uncomfortable on the hike out (and there were a few tears from the kids), but that doesn’t need a rescue, discomfort is not the same as an emergency. When we arrived home, we still had clothes we hadn’t worn. And, not a trace, or even threat, of frost-bite.

Personally, if you asked me to go out and do it again next weekend, I would. Fiona still reports liking winter camping better than summer camping.

When we got back to the car (the lone car in the parking lot), not only was it covered in piles of snow, but the snowplow had been by. The kind driver had plowed to the side we were parked on, leaving a very tall snowbank/windrow to get through before getting underway. Thanks. While I loaded the car, Tania and the kids shoveled out a space in the wall of snow so we could get underway. Luckily, the snow hadn’t melted and frozen again and, therefore, was relatively easy to remove.  This time we weren’t too concerned about the sweat the shoveling could generate since we’d be driving back to Calgary in a warm car (you want to avoid sweating whilst winter camping).

Every outdoor trip/adventure has its “learning moments” and this one was no different.  When you’re dealing with the outdoor elements, you need to be prepared for all types of weather, which we were.  Even with our uncomfortable moments, it was still a successful adventure with a lot of fun moments, but definitely a little more “adventure” than some of our trips.