First, if you haven’t been to Lake O’Hara, put it on your list. It is one of the prettiest mountain lakes I have ever seen, and that was in the winter when lakes aren’t usually as impressive.

We wanted a family friendly ski camping weekend. Lake O’Hara was high on our list of places that we should go to and the reports were saying that it had reasonable conditions. 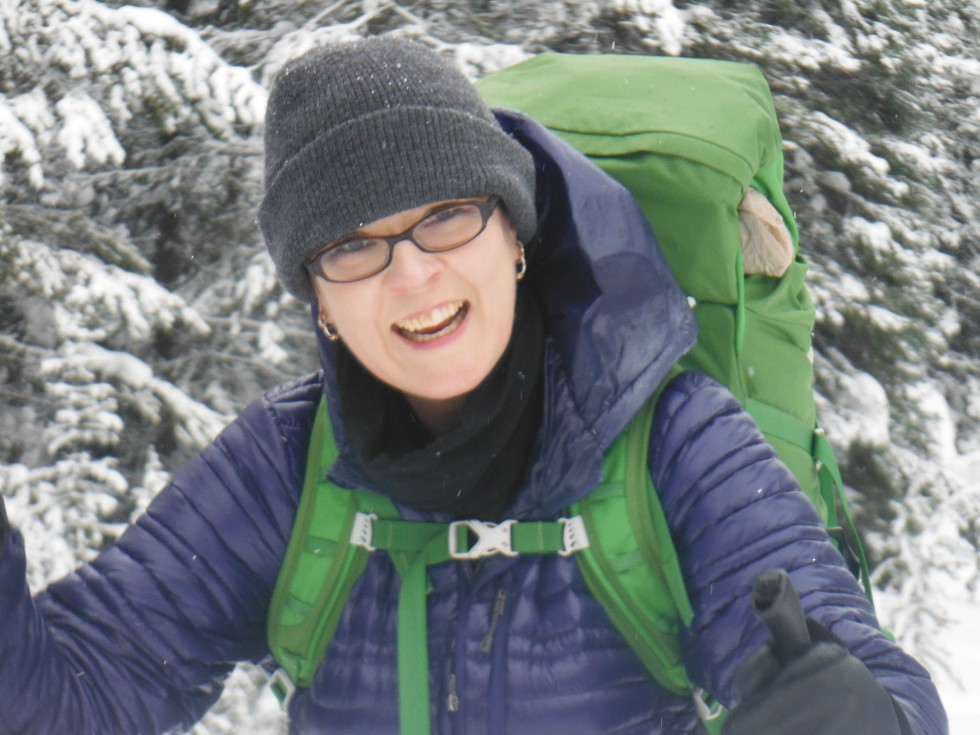 We booked a couple of sites at the campground (there is a lodge and the Elizabeth Parker hut as other accommodations at Lake O’Hara) and we were off.

The ski in is not that difficult, but it has a couple of relentless uphill sections. Though the first 2km took us about an hour and a half, we sped up to a reasonable pace for the remaining 8km and arrived at the campground with enough time to set up in daylight. Many of the obvious spots in the campground were already taken, so we scouted out an area where we thought we could pitch the tent and the tarp and started shovelling.

I knew that the tarp pitch was poor, but I was too lazy to shovel out a better area, so I left it as it was. Tania and Tadhg were going to be safely ensconced in the tent and Fiona is not that fussy about what she sleeps under.

The campground at O’Hara has a couple of picnic shelters with wood burning stoves.  The other group were in one of them and thought they were obviously friendly, we chose to cook in the second shelter. We had a delicious Valentines day dinner of bean and cheese burritos (home cooked – dehydrated beans and fresh cheese and tortilla shells).

After a bit of reading, we decided to turn in and get a good night sleep. It was snowing heavily as we went to bed, so there were no stars or aurora visible. The other camper group spent the evening at the day shelter further up the trail and they were so quiet coming back to sleep that I wasn’t sure when they returned – I really like it when groups like that are sharing a campground with me.

Around 1AM I woke to a tarp that had sagged from falling snow almost to my face. I roused myself to reset the tarp and tie it low enough to shed at least some of the snow that was falling. The  wind was blowing quite heavily, so occasional clumps of snow were falling from the tree branches. I did a quick job, but at least it kept snow from falling on my face so much.

Morning dawned much clearer than the evening. We had a good view through the trees of the surrounding mountains unobscured by clouds. Fiona was first up of course, and we went down to the cook shelter to make coffee.

I got a chance to chat with the other group in the campground and got some really good advice on pulk sleds and attachments. They had had a good chance to perfect their designs and their sleds had much less slack and much better control than mine.

We had a nice leisurely breakfast and set out for some day skiing. Lake O’Hara itself is about half a km past the campground and it is stunning. The surounding mountains are beautiful and have many hiking trails to explore. Many of the trails involve avalanche risk though, so we limited ourselves to a select few. It was a perfect day to ski around the lake itself, and so we did the west half of the lakeside trail.

Though the skiing for the day was short, we still had a great time and the views could not have been better. We will definitely be back.

The group that left the campground left behind a quinzy and Fiona immediately declared her desire to sleep in it. While it seemed a little more closed in than her usual choice of a tarp, it also saved me setting up the tarp properly and allowed me to pack the tarp away early. We used the super roomy quinzy as a spot to read to the kids for the evening and Tania got to do some reading of her own in the roomy and quiet tent.

Once again it snowed most of the night and so once again we awoke to fresh snow. We were pretty thrilled since we figured the fresh snow would provide some drag to help slow down our primarily downhill ski out to the car. I offered to carry Tania’s pack in  the sled so that if she fell, she wouldn’t have the extra weight to push her into the ground.

The ski out was,  in fact, quite slow, the fresh snow gave us lots of control. Unfortunately, we had some struggles with ice on our skis in the flat and uphill parts of the ski out. Even Tania’s waxless skis were building up enough ice on the bottom that her skis would not glide. All we could do is stop to scrape the ice off and try to keep moving. From km 5 to 3, the terrain is quite rolling, so we made poor progress as we needed to stop and scrape at least 3 times.

The view from the ambulance-bike is way better tha

Sometimes, if you’re enough of a bar-tape nerd,

Just down from the glacier is the whirlpool tub.

Nuclear-looking cloud - in hindsight it was almost